The vertebral column (also called the spinal column) is made up of 33 bones known as vertebra. Each vertebra is separated from the adjacent vertebrae by intervertebral discs, a spongy but strong connective tissue. The intervertebral discs, along with ligaments and facet joints, connect the individual vertebrae to help maintain the spine’s normal alignment and curvature while also permitting movement. In the center of the spinal column there is an open channel called the spinal canal. The spinal cord and spinal nerves are located in the spinal canal, where they are surrounded by spinal fluid. On each side of the spine, small openings between each vertebrae called the foramen, allow nerve roots to enter and exit the spina canal.

The spinal disc is a soft cushion that sits between each vertebra of the spine. This spinal disc becomes more rigid with age. As the spinal disc becomes less elastic, it can rupture. When the disc ruptures, a portion of the spinal disc pushes outside its normal boundary, and this is called a herniated disc. A herniated disc occurs when the fibrous portion of the disc ruptures or tears, and the jelly-like core squeezes out. When the herniated disc compresses a nerve, the result can be a pinched nerve. A pinched nerve may cause pain, numbness, tingling, or weakness in the arms or legs. The substance that makes up the disc’s jelly-like core can also inflame and irritate the nerve, causing additional pain.

Is a bulging disc also known as a herniated disc?

A bulging disc occurs when the outer wall of the disc weakens but doesn’t rupture, and “bulges” outward. A herniated disc may actually begin as a bulging disc whose outer wall is then ruptured by a great amount of pressure. 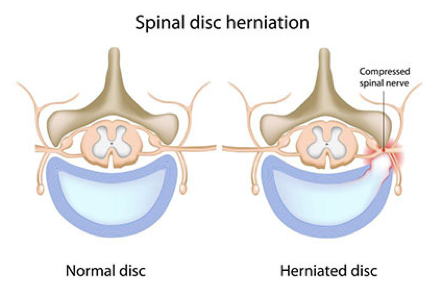 Where can disc herniations occur in the spine?

Disc herniations can occur in the cervical, thoracic, or lumbar spine. The location of the pain depends on the location of the herniated disc. If the herniation occurs in the neck, it can cause pain to radiate through the shoulder and the arm. If the disc herniation happens in the mid-back the pain or numbness can travel around the rib cage, from the back and also to the front of the chest or upper abdomen. If it occurs in the lower back, the pain can radiate down into the hip and through the entire leg. Other symptoms include weakness or muscle fatigue, and this is caused by affected nerve pressure associated with the muscles. So often symptoms of muscle fatigue will cause an individual to stumble when walking. An individual can suffer from a herniated disc without knowing it. This could be due to a minor herniation or lack of pressure being applied to the nerves in the spine. The only way to determine this is through x-ray imaging.

Treatment options for herniated discs vary depending on the severity of the individual’s condition and level of pain. Over the counter pain medication and narcotics is the simplest approach. Cortisone or steroid injections can be injected directly into the area of the spine where the herniated disc is leaking and around the nearby nerves. This is used to reduce swelling and inflammation long enough to allow the disc to heal. Spinal manipulation through chiropractic care is another moderately effective way to treat herniated discs. Discectomy is a procedure where the surgeon removes the protruding portion of the disc surgically. The final and most permanent solution to treating a herniated disc is through spinal fusion, where the disc may need to be completely removed and metal hardware is inserted to provide proper spinal stability. While this option provides spinal stability, the individual will lose a significant range of motion and mobility.

Get Started Today
Biologics have shown to be successful non-invasive treatment options when it comes to disc related conditions. Stem cells and platelet rich plasma (PRP) are harvested through an individual’s own blood or bone marrow. The platelets are separated during a process called centrifugation and the extract is injected into the damaged disc. The goal is for growth factor proteins to repair the tear and allow for regeneration of the disc.

Let us help you to get your life back. A good treatment plan can help to relieve your discomfort and return you to a pain-free and active lifestyle. If you are looking for help with this condition, request a consultation now with one of our minimally invasive spine specialists. Cell Bionics Institute offers a comprehensive spine functional restoration program to help patients with all of their spine care needs. With every treatment, we work to help with your current health situation, while also keeping your future health in consideration. The Biodisc® procedure is a much less invasive option, with a much more shortened recovery period than a more invasive procedure, such as spinal fusion surgery. See if you might be a candidate for Biodisc® today. Request a consultation with a spine care expert to discuss a treatment customized treatment plan to help with your back pain.

Heal Your Body and Alleviate Pain Without Surgery!